Fight or Flight: does your child react or respond to problems? 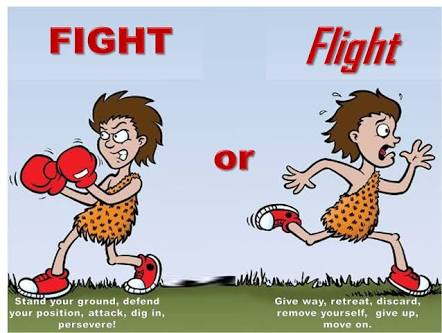 The choices we make determine our destiny.

In the midst of a conflict, it can be extremely difficult for children to remain calm and choose a constructive response. One of the most significant reasons why this occurs is because of their body’s automatic reactions.

When children perceive a threat in a conflict situation; whether it be someone being mean and hurting them emotionally such as name calling, or they experience a physical hurt, such as someone punching or kicking them; their automatic fight or flight reaction is alerted. This fight or flight mechanism mobilizes a lot of energy rapidly to the body and mind to cope with threats.

For a fight or flight response to be produced, the hypothalamus activates two systems: the sympathetic nervous system and the adrenal-cortical system. The sympathetic nervous system uses nerve pathways to initiate reactions in the body such as; increased blood pressure, heart rate and sweating. The adrenal-cortical system sends hormones through the blood stream that affect breathing and muscle contractions and other consequences. Together these two systems change the state of a child’s body.

Simultaneously a child’s thinking and self talk are triggered, they may be flooded with thoughts such as; “That’s not fair!” which is a fight thought or; “Nobody likes me.” which is a flight thought.

The physiological responses of the whole body resist against rational thought and before they know it, the child has done something they’ll regret.

A child can either allow these reactions in their body to control their behaviour or they can be trained to manage these bodily reactions and respond more constructively by calming down their body and mind.

For many children this is a challenge, as it is for some of us as adults.

Reacting is driven by our emotions and our bodies fight or flight response. It is often sporadic and fuelled by body changes such as a racing heart, churning stomach or a sense of being on high alert.

Responding is like the flip side to this – it is mindful and logical, less guided by emotion. It takes focused time and practise to train children to make a choice that is not driven by a defensive survival instinct (fight) or a victim mentality (flight).

This calming down body and mind response has the potential not only to benefit the child but also those that are involved in the conflict and the environment in which they are a part of.

This may involve mindfully thinking of a more helpful self-talk to increase their resiliency and their self-confidence. They need a well-formulated, brave “response” that releases the tension and problem-solves a way to resolve the difficulty. Without being skilled in how to respond, children are more prone to lose control and either attack or avoid to resolve their conflict or bullying situations.

You’ll know if a child has developed a habit of a fight reaction. Their voice will be loud and often their words will be aggressive, their hands may ball up into fists, muscles tense and their body language is threatening. These children often have a head filled with revengeful, defensive angry thoughts. Their short temper can make relationships strained and cause them to struggle with focusing in learning situations. Worse still, if this reaction continues to become a habit they are at great risk of using abuse or violence as a means to solve their conflict, leading to bullying behaviours, coward punches, domestic violence and even prosecution. Adults who use fight repeatedly to resolve problems often find it hard to get and keep a job, or to attain and maintain positive relationships.

Conversely, a child with a “flight” reaction will avoid confrontation at all costs. These children suffer from such extreme anxiety about the possibility of a conflict that they play by themselves, try to be with a teacher at all times or worse, try and skip school or other potential conflict territories altogether. In adulthood repeated flight reactions can manifest in physical and mental health conditions, withdrawal and isolation, substance abuse, self harm and in some situations even attempted suicide.

So what can we as adults to help children?

MODEL A CALMING DOWN RESPONSE: One of the most essential modes of communicating a response rather than a reaction to conflict is to model it for your children. Think about it: how often do you calm your mind and body when you experience a disagreement at work or at home? What are you teaching your offspring as an appropriate way to cope when things don’t go your way?

NOTICE EXAMPLES AROUND YOU: When you’re watching television with your child keep an eye out for characters that choose fight, flight or calming down responses to conflict. Point them out and discuss them with the family.

TEACH YOUR CHILDREN: about the different responses and help them to create a plan to calm down when they feel the changes starting to happen to their body.

HELPFUL THOUGHTS: have some positive helpful thoughts around the house that you can encourage your child to focus on when they are flooded with upset thoughts.

READ ABOUT IT: Choose picture books that contain stories in which characters display flight, flight or calming down behaviours. Read them to the class and see if they can tell the difference. Discuss alternative story endings if the character had chosen a different response to their challenge.

PLAY GAMES: Make cards with different responses such as yell, swear, run away, hide and dob. Play a game where the class have to figure out which behaviour is fight and which is flight. Talk about the problems associated with these choices and role play alternative methods to calm down and resolve.

TO FIND OUT MORE

For more about equipping children to deal with everyday conflict and bullying, read Empowered for Life by Jocelyne Chirnside , the valuable and informative book helping schools and parents ensure children have the skills to cope with a rapidly changing society, and are better positioned to be capable and active citizens.

You can also encourage your school’s principal to register for the BRIDGE BUILDERS program which involves children in workshops that provide them with a comprehensive range of skills to deal with conflict and bullying.

The greatest WordPress.com site in all the land!

Educators shootin' from the hip.

A good teacher is like a candle. They consume themselves to light the way for others.

Learning and Teaching Literacy in the Digital Age

For the Love of Literacy

Becoming a Teacher-Librarian in the 21st Century.